Democrats hate and call for violence

Maxine Waters: said dems should get in their faces and tell them they are not wanted here. Referring to Republicans

schumer: Kavanagh you will reap the wrath of the wild wind with your decision on the roe v wade. Then a guy went to Kavanaugh home tho shoot him but was stopped.

Biden and his admin encourage Dems to break the law and go to SCOTUS homes and harass then. This is against the law.

Trump and trump supporters are being arrested for nothing however nothing was done to hillary for destroying 30000 emails, making the false Trump russian collusion attacks on Trump, being silenced on twitter and Facebook. Zuckenberg said FBI came and told FB to limit content on Hunter Biden laptop information, even though it was true. Also Hunter Biden not prosecuted for crack usage, selling his fathers office, paying his fathers bills from foreign governments. Russia and china. Falsifying firearm docs with drug usage. Throwing a gun in a dumpster with no repercussions.

Dems are prosecuting Reps as election denyiers for 2020 when they did under Bush and Gore as well as Hillary and Trump. To this day Hillary says she won the election and so does Gore buy they are not silenced.

Yesterday Biden held a party at the White house celebrating his unsuccessful program. he says 0 inflation, he has 89 percent inflation. Gas is up 25%, food up 11% and power up 8% over last year. And the idiot is celebrating.

They were dancing and singing in celebrating the inflation reduction act.

They had James Taylor there sining Fire and Rain. The he was talking about the Green Deal which this celebration was not about. Fucking Idiots

Cut you off of spending

Collect taxes they think you owe.

To old cut of your funds

Know everything you buy

The White House is defending President Joe Biden’s divisive “Soul of the Nation” speech that cast Trump-aligned Republicans as a threat to America.
“Donald Trump and the MAGA Republicans represent an extremism that threatens the very foundations of our republic,” Biden said in a Sept. 1 speech delivered at Independence National Historical Park in Philadelphia, referring to the acronym for former President Donald Trump’s 2016 campaign slogan, “Make America Great Again.”
Biden stood in front of deep red backlighting flanked by two Marines during the speech. The optics drew criticism even from mainstream commentators who said it was historically unusual for a president to denigrate his political opponents while using U.S. military members as props.
During a White House daily briefing on Sept. 7, White House press secretary Karine Jean-Pierre defended the speech and said that it was not divisive.
“The way that we saw the speech is that he was talking to a majority of the country who agree that we have to protect our democracy, who agree that we have to protect our freedom, who agree that we have to protect our rights,” she said.
The press secretary went on to say that it’s “problematic” when people call Jan. 6 protestors “patriots.” Such statements are “coming from leaders,” she added.
Jean-Pierre’s characterization of Republicans who question the outcome of the 2020 election as a “threat to democracy” is in stark contrast to her own denial of past election results.
Just a month after Trump beat Hillary Clinton in 2016, Jean-Pierre wrote in a tweet, “Stolen emails, stolen drone, stolen election.….welcome to the world of #unpresidented Trump.”

Doctors in California can lose their license is they discuss the negatives and side effects of covid vaccine. Nazism

Posted in Politics News | Leave a comment
Posted on September 7, 2022 by Josh Ketcham

Biden stiring up hate, baiting the right. Call trump voters enemies of the United States. So much for unity! He and those behind him ,Obama, only plan to destroy individual freedoms and put every one under government control. FJB to the max. Fascist fuck!

Posted in Politics News | Leave a comment
Posted on June 7, 2022 by Josh Ketcham

House Democrats Float Various Gun Control Proposals
In the House, where simple majorities rule, Democrats have pushed for the wide-reaching “Protecting Our Kids” Act, which was pushed through the House Judiciary Committee in a party-line vote last week. It is expected to come to the floor for a vote later this week.
That bill, among other provisions, would ban the sale of “any semi-automatic centerfire rifle or semi-automatic centerfire shotgun that has, or has the capacity to accept, an ammunition feeding device with a capacity exceeding 5 rounds” to citizens below the age of 21. Currently one only needs to be 18 to buy such a weapon.
It would also codify the Department of Justice’s controversial ban on bump stocks, a weapon modification that increases the fire rate of a semi-automatic firearm.

The U.S. Department of Homeland Security issued a nationwide terrorism threat advisory on Tuesday after a series of mass shooting incidents and the leak of a draft Supreme Court decision on abortion. The terror advisory also raises concerns about continued unrest in the lead-up to the 2022 midterm elections.

“In the coming months, we expect the threat environment to become more dynamic as several high-profile events could be exploited to justify acts of violence against a range of possible targets,” the DHS said in a Tuesday statement. “These targets could include public gatherings, faith-based institutions, schools, racial and religious minorities, government facilities and personnel, U.S. critical infrastructure, the media, and perceived ideological opponents.”

“The Constitution preserves the advantage of being armed which Americans possess over the people of almost any other nation . . . [where] governments are afraid to trust the people with arms.”
—- James Madison

The complete list of 200 U.S. organizations that have financial ties to George Soros 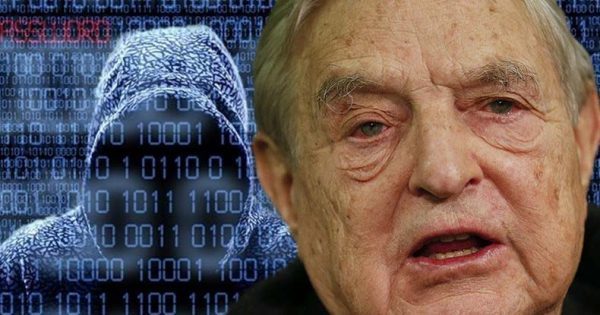 With a hat tip to FreedomOutpost.com, here’s the complete list of the 200 U.S. organizations that have financial ties to Nazi war criminal George Soros. Both George Soros and his Open Society Foundations provide funding directly or indirectly to all these groups, most of which actively seek to overthrow America’s democratic Republic.

s and his Open Society Foundations provide funding directly or indirectly to over 200 US organizations.

“Secondary“ or “Indirect“ Affiliates of the George Soros Network

The list comes from Discover the Networks and needs to be circulated across the nation.

The man has no conscience, as demonstrated in the following video. He also financed over 50 anti-Trump protest groups and even funds Facebook’s laughable “fake news fact checking” group. Here’s a question for President Trump, when you finally get around to appointing an investigator like you promised, how about tying up some loose ends with this guy?

Remember when Democrats applauded Bill Clinton despite his sexual misconduct against multiple women in the 1990s?

Another day, another DEMOCRAT accused of sexual harrassment: Why is there a double standard for Dems and Republicans?

The Left’s inescapable HATE problem: Their hate doesn’t count but YOUR hate should get you banned from everything

Liberals attack the FAMILY: If you have kids, YOU are destroying the planet